The Phenom II has been phenomenal. The Athlon has gotten me through the turn of the millennium. Is it time to upgrade from the Phenom II? Well I am lucky enough to have been chosen for an AMD test drive promotion. There were 95 of us that got this kit. All have similar kit. The only thing different is the motherboard. Everyone got a random motherboard with FM2 socket from different manufacturers. I got one from Asrock. 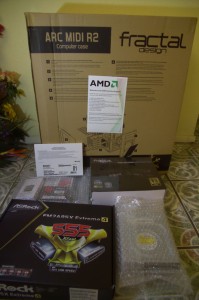 My gripes with way AMD counts their cores is that it makes it seem like you are getting less per core. When they decided this modular design I remember they were competing with Intel’s hyperthreading. I wish they would have counted the module as core module and each ALU a hypercore. It would have been easier to explain in a marketing point of view. It avoids the “it’s not quite a full core” that people complain about.

The case it and motherboard has a lot of USB 3.0 ports and only two USB 2.0 ports, quite the opposite of my old system. The kit looked completed until I started putting them together. It was missing the heat sink. A quick search online and a user mentioned that I should contact them to for a stock heat sink to be sent. So I did. When the heat sink arrived it wouldn’t fit. The bar and lever was a millimeter short and I can’t get it to hook on to the latch.

So I ordered the Corsair H100i water cooler. This brings the project to $99 from my pocket. The H100i cooling grill and fan fit the case snuggly, barely enough room for upper memory lever to maneuver. I set the fans to pull the air from the top of the case. This was the recommended settings given by Corsair. The top of the heat plate shows the Corsair logo with color changing LED lights. You can choose a fixed color, color cycle or change depending on temperature.

On first boot the BIOS looks very different from the ones I’ve been used to. It has a graphical interface as opposed to the old plain text with colors. You can also use the mouse on the BIOS. Even connect to the internet to update the BIOS which I did use.

Comparing my current Phenom II X6 1055T it felt like a crossgrade instead of an upgrade. Tomshardware put the A10 6800 one tier above the 1055T noting that you need it to at least two tiers to see a speed improvement. Ruse was playable at the lowest display settings. Then again this is the lowest setting so I quickly installed my HD 6770 in crossfire.

It’s a good timing to try out Windows 8.1. A new system and a new OS, that’s great time to put two and two together. Is Windows 8.1 workable without a touch screen? For me it is no. I have not tried Windows 8 so I can not compare. Windows 8.1 to me is like a Full Screen Windows Media that you can’t minimize. The desktop is an app within Metro that doesn’t fit well together. It’s an Apps and Application disaster zone of a UI. Also some drivers just don’t seem to work but worked fine when I went back to Windows 7.

Making AMD Test Drive my own

Before I experimented with Windows 8.1 preview I tried to see if my old hard drives would be recognized. They were set up as a pair of RAID 0 and pair of RAID 1. It didn’t recognize the drives so I just used the included SSD 60 GB. After installing Ruse, MS Office 2010 and another game, the drive was quickly full. So I kept looking the strange looking BIOS to see what setting it has and what is possibly wrong. I did set it to RAID. After a week I accidentally found why it didn’t recognize it and it has something to do with UFI mode. It was a mode for Windows 8 but there is a mode for legacy. Legacy worked for the old RAID drives. I can now access my 11 years of photo archives.

I’ve named my computer appropriately as AMDTestDrive. My previous one was the age old Neutron Orange which started out as an Athlon 64 X2 but the mobo got fried and I upgraded to Phenom II X6. The Phenom II X6 has now been donated to my brother.

This AMD Test Drive kit came with Corel After Shot software. What a better time to use it. I am an aspiring photographer. I’ve taken many pictures using raw on my T2i and After Shot can read them all very quickly. If only Paint Shop Pro was this fast and easy to use. It does give me the option of using Juniper or Devastator. I take it that the code name for the APU GPU is devastator. At least it I know I can use the GPU portion of the A10 when paired with a discrete graphics card like my AMD HD 6770 in crossfire.

I have not installed Cyberlink Power DVD. I got Windows Media and VLC installed already. Not sure If I want to add more to the clutter of players.

I get a free Sim City for submitting this review so I’ll be giving that a try soon.

The built in sound died on me one day after plugging in my head phone. It worked one day with my head phones the next day it wouldn’t play and it would erratically think the head phones are plugged in and not plugged in. I have a Bluetooth speaker though which worked fine but anything plugged in directly had no sound. I had to buy Sound Blaster Recon3D which sounded much better with a header to plug the HD audio on the case.

I’ve been procrastinating on this review for a month now and I can now see dust forming on the filters in the front and top of the case.

I’d like to thank AMD for allowing me this opportunity to test drive and keep this brand new PC. My Neutron Orange PC was showing signs of old age though Phenom II X6 has shown to be a great value and still as good as some of the newer systems.